Includes the essay Owen Barfield published in 1928:
OF THE CONSCIOUSNESS SOUL 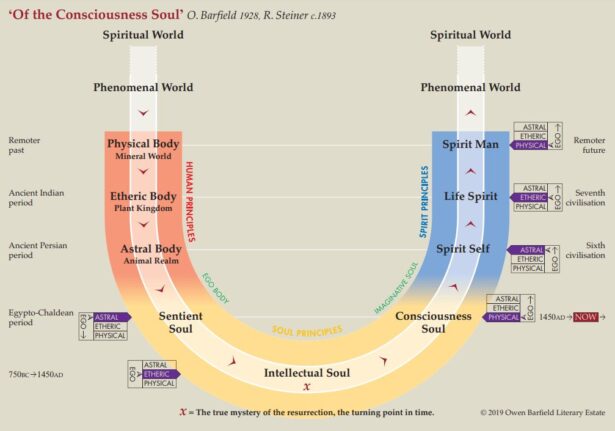 A partial overview of the essay:

Humans are a ‘microcosm’ evolving from a ‘macrocosm’ and finally returning to an ‘at-one-ness’.

In our age the Human Ego operating through the Physical Body is the cause of our sense of separation.

Isolation is most complete in the Physical Body and its corresponding Consciousness Soul stage, during which the microcosm is fully and finally severed from the macrocosm.

In the Consciousness Soul we experience a nothingness, out of which can emerge a knowledge that truth resides in beauty and imagination.

The tragedy of our time is that the romantic–imaginative consciousness is being undermined. Anthroposophy provides a path out; it can be found that the source of life is within instead of without.

In our time the nascent development period of Consciousness Soul is ending so that we no longer trust mere experience. There is instead a frantic search for meaning. But meaning can only be answered by the Intellectual Soul. Only there is the ‘interior/exterior’ or the ‘subjective/objective’ understood in its profundity.

That’s because during humanity’s passing through that period, the deed occurred which solved the problem of subjectivity  → The Incarnation of Christ.

Meaning entered Humanity in the age of Intellectual Soul so that in the age of the Consciousness Soul we will be able to discover that Meaning for ourselves.