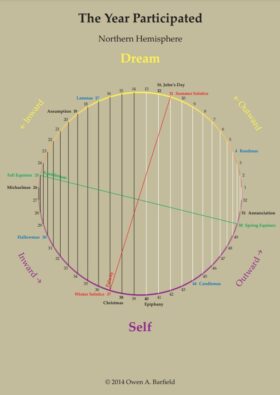 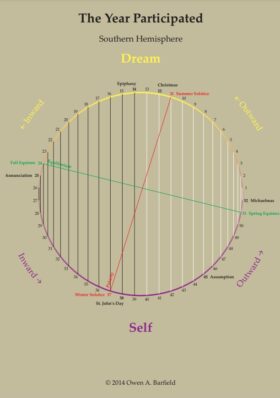 The Year Participated is an interpretation of Rudolf Steiner’s Calendar of the Soul (from 1913). Its aim is to facilitate a felt experience of the natural and spiritual world.

The circle represents the cyclical character of the seasons and our lives. The year is divided into two halves, rhythmically expanding and contracting in an anti-clockwise spiral. An echo of the breath of life. In nature, and in humanity’s inner-nature, the polarities between active and  passive are at the solstices and equilibrium is at the equinoxes.

The 52 weekly verses are stations through the year; each verse reconnects the inner world of Soul with the outer world of Nature. Via poetic imagination the appropriate soul balance for each week resonates, and a greater understanding of the underlying spiritual impulse is reached.

As each moment is one of transit (and of exile & return) there are recurring correspondences between earlier & later stages. Each week is paired with its compliment, linked in the diagram by vertical lines.

During any week of the year we are facing both ways towards DREAM and towards SELF. It is the interplay between these two faces that creates the Tertium Quid, the essential “third thing”, which harmonizes the Soul within Us and the Spirit within the Cosmos.

The ebb and flow implicit in the calendar is both internal and external; a relationship of detachment flowing towards renewed participation.  Movement is felt from a previous stage towards a succeeding one.

By reviving a feeling of ‘At-one-ness’ with the natural world, The Year Participated serves to hint at the participation of human consciousness in the wholeness of the world; ultimately it is through human imagination that meaning is reached.