There are spiritual paths known collectively as ‘The Way’, most notably:

Williams, as a historical researcher was attracted by the latter.
Barfield, as a philosophical thinker was convinced by the former. 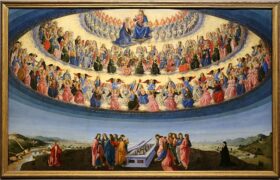 The Assumption of the Virgin by F. Botticini, 1475.
Painting resplendent of the Way via the ‘Negative’ 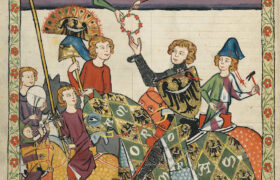 Codex Manesse, 1304.
Illustration resplendent of the Way via the ‘Affirmative’

Williams uses the word co-inherence to refer to an aspect of St. Paul’s revelation “Christ lives in me” Gal. 2:20.
Barfield’s life-long task was to bring meaning to the whole of that revelation.

In The Descent of the Dove Williams quotes directly from C.S. Lewis’ Allegory of Love which was dedicated to Barfield.