The inestimable Owen Barfield differentiates three epochs in the evolution of consciousness. The first he refers to as “original participation.” The anthropologist Lucien Lévy-Bruhl meant to indicate a similar condition under the rubric participation mystique. Other thinkers refer to the same as “tribal” or “primal” consciousness. Original participation denotes a condition of consciousness in which the self has not yet precipitated out of the semantic solution of the world. For this reason, neither “spirit” nor “matter” exists as a concept because each of their meanings depends on just the phenomenological antithesis with its counterpart that is not a characteristic of the mind immersed in the state of original participation.

An originally-participating human being does not say “I” to himself. Indeed, he does not juxtapose himself to the world altogether because neither “self” nor “world” exist as regulative principles of his experience. On the contrary, the originally-participating man recognises the wind that inspires his lungs and animates his limbs to be same as the one that rustles the birch trees and draws their sap up through their capillaries. Obviously “wind” does not strike one of today as the proper term to include these four process, except in a very figurative sense. Indeed, this very fact that this single world does not compass all of these processes is an hallmark of our lack of original participation.

Let us explore this semantic unity and divergence further. The following verse from the Gospel of John, King James Version will prove supremely illustrative:

The seventeenth century Jacobin scribes, in order to convey a meaningful passage, were compelled to translate the same Greek word in three different ways in as many verses. What appears variously as the English words “Spirit,” “spirit,” and “wind” above, and elsewhere in the King James Version — in Genesis 2, for instance — as “breath,” are all derived from the same Greek word πνεύμα (pneuma). If the mind of today wishes to understand its ancient forbear, it must not suppose this can be accomplished without the recognition that words meant something different in ancient times and language itself was experienced in a different manner than that with which we are familiar today.

It is necessary to grasp that pneuma, in the days in which the Gospels were written, meant neither “spirit,” nor “wind,” nor “breath,” nor “inspiration,” etc… “Pneuma” was pregnant with all of these terms, but rather meant something of which our language customs of today offer no adequate comparison except, perhaps, in the form of prepositions like “in” and “about.” Let the reader reflect on what these terms mean. If the exercise is successful, she will experience an unsettling, and dare one even say, “vertiginous” feeling of being unable to fix the word to any material denotation or referent and yet, at the same time, she will be aware of its undeniable significance. Indeed, the meaning of such words is actively present without permitting itself to be represented in any single external form. The presence of such words is something we may still participate with our consciousness. Representations, by contrast, appear to confront us with opaqueness and alterity. 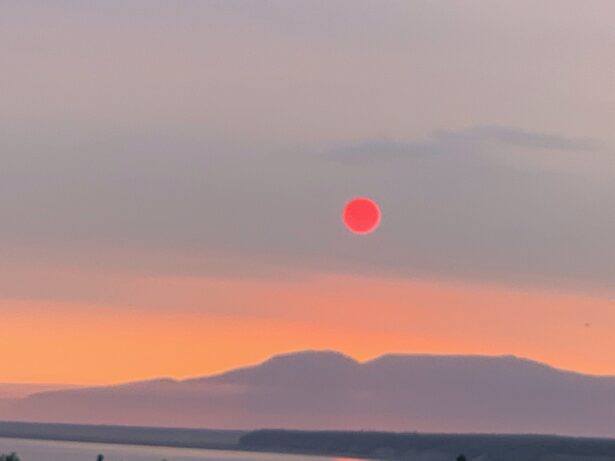 The setting sun, reddened by smoke from Siberia. Photograph taken by the author.

History is the gradually concession of original participation to “onlooker consciousness.” Experience, once a living matrix of presences, becomes an aggregate of representations. The sunset of original participation begins with the ancient Greek thinkers and the Hebrew prophets, but “the twilight of Minerva’s owl,” really descends, as it were, with the Scientific Revolution. Thinkers like Ockham, Copernicus, Bacon, and Galileo were cardinal exponents of onlooker consciousness, though Cartesius sounded the clarion call for this mode of experience. The hallmark of the latter is the division of subject and object, the I juxtaposed against the world as not-I.

There are important nuances to consider. For instance, if we wish to situate the historical onset of onlooker consciousness, I think the answer will vary widely according to the particular peoples that are in question. While a descent into “onlooker consciousness” began with Greek philosophy and the stringent monotheism of Israel in the fifth and fourth centuries B.C., it took until the end of the Middle Ages for Europe, especially in its Northern regions, to undergo a similar shift. In other words, the Northern peoples remained in original participation for the better part of two thousand years after the Mediterranean peoples had begun to leave it. Aboriginal tribes arguably have not lost their condition of original participation even today.

In the history of Europe, it is as though waves of original participating peoples come lapping against the shore of a civilisation of onlooker consciousness, and the former are slowly dried out on the strands of the latter. I’m thinking of the Visigoths sacking Rome, for instance, and the Viking invasions of Europe. In both instances, a youthful and vigorous folk confronts a civilised one, and both are fundamentally transformed in the process.

Another important aspect that makes the transition from original participation to onlooker consciousness so interesting is that each of us recapitulates an analogous “desiccation” in our own biographies, as we descend from the dreamy participation of childhood into the dry, prosaic, and utilitarian operations of adulthood. We could say each biography recapitulates the phylogeny of the race. It may become a source of personal inspiration to consider how our individual biographies simultaneously carry forward the story of the human race. A man who undertakes the magnum opus to unite the Sun and Moon in himself — reintegrating the separation inherent in onlooker consciousness into a higher union — also accomplishes this work on behalf of humankind. Hence it is written (by John Donne), “no man is an island… send not to know for whom the bell tolls, it tolls for thee.”

Barfield calls this next phase in the evolution of consciousness “final participation.” I have explored this theme under the rubric of Goethean science on other occasions. Goethe was indeed unconsciously pioneering the final participation that is the birthright of us all but the realisation of which depends on the individual efforts of each of us. Rudolf Steiner brought to fruition the capacity that germinated in Goethe’s work and this progression, together with Barfield’s role in it, was the subject of my doctoral dissertation.

Hands at the Cuevas de las Manos upon Río Pinturas, near the town of Perito Moreno in Santa Cruz Province, Argentina. Creative Commons 3.0