Even as recently as this year (2021) there has been a well-enough known C.S. Lewis commentator who wrongly states that Owen was “not a Christian.” This is not only factually incorrect, but also quite bizarre. I really feel that I must set the record straight.

I would have expected him to know that Barfield was baptised, as an adult, into the Anglican Church with C.S. Lewis in attendance.

As a Christian philosopher and thinker, the breadth and depth of Barfield’s understanding of Christianity are far beyond the ordinary. To quote just 2 reviews of his seminal work, Saving the Appearances: “Basic, profound, original and difficult. Time may seal it as a masterpiece” (Church Times) and “Owen Barfield is a paradigm-busting Christian thinker, and this is a book that will not go out of date” (Richard Rohr, O.F.M)

The same commentator seemed to be unaware of the long walks that Owen and Jack (C.S. Lewis) took during each Easter period between 1927 to 1939 (when WW2 stopped them). More on the unique friendship between Owen and Jack, which illuminates both their thoughts on Christianity, can be found in Owen Barfield on C.S. Lewis. 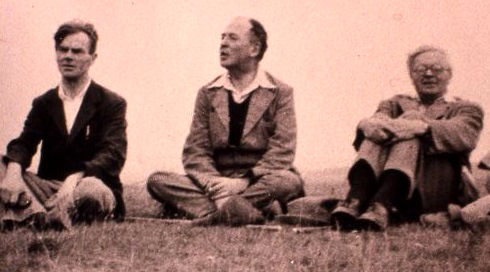 As Professor David Lavery explains, Christ is central to Barfield’s work and philosophy.

In ‘Philology and the Incarnation’ — his own version of Sir Thomas Browne’s Religio Medici — Barfield explains how his own thinking on the evolution of consciousness, in particular his study of language as a record of that evolution, eventually required his acceptance of the teachings of Christianity. The raised-as-an-agnostic Barfield had no Damascus, no moment of conversion. The facts of the evolution of consciousness logically required him to become a Christian.

Throughout his books [Barfield] discusses the pivotal role of Christ in the development of human consciousness.

For Barfield, Christ is, first and foremost, “the cosmic wisdom on its way from original to final participation.” “In Christ . . . we participate finally the Spirit we once participated originally” (Saving the Appearances 219) Thanks to Christ, Barfield would write in ‘From East to West’, “the human Ego, the true Self, of man descended from the purely spiritual heights, where it hitherto dwelt, to the earth. Had Christ not come to earth, individual human beings would never have been able to utter the word ‘I’ at all” (Romanticism Comes of Age 56).

Detail from 'Nativity of Jesus' by Sandro Botticelli, 1500